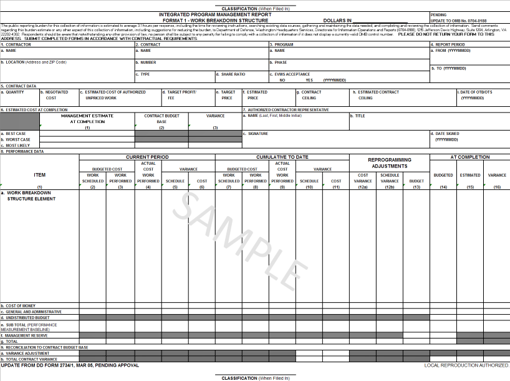 As an update to the Contract Performance Report (CPR) that preceded it, the IPMR did not change the existing Formats 1 through 4 reports by much, but it did add new requirements. Format 6, for the Integrated Master Schedule (IMS), and the Format 7 history file were added, and a UN/CEFACT based XML schema for electronic submission was created. By now, all major IPM software vendors have incorporated the IPMR into their tools, and the reporting requirements have been adopted by several civilian agencies as well, including: NASA, DOE, FAA and CMS (HHS). A summary of US civilian agency EVM requirements can be found here.

While the IPMR is still new compared to other contract reporting requirements, PARCA is in the process of developing a new set of requirements that will overhaul the entire Report.

What is being considered?

In mid-2016, PARCA started an IPMR Update Initiative to investigate the benefits of removing all legacy Format requirements for EVM cost performance data submissions. At a minimum, this would eliminate IPMR Formats 1 through 4. In their place, a single data file would be submitted from which the government program offices and contract oversight authorities could pull the necessary cost performance data as-needed. This new data file would contain time-phased cost performance information at a lower-level of detail, similar to the current Format 7 report. The exact level of detail for WBS, OBS and Element of Cost is still being discussed, but it is PARCA’s hope that this new data file could serve to support the DCMA data-driven compliance metrics.

PARCA is in the process of testing options, including replacing the UN/CEFACT XML data format with a JavaScript Object Notation (JSON) format. This change will have a significant impact on software tool vendors, who are being asked now to comment on the proposed data format changes.

PARCA, and other agency departments that use EVM data, have been looking to make a substantial change for some time. There are two primary drivers for this: to address deficiencies and reduce redundancy in the current reports.

The current IPMR, like the CPR before it, does not contain time-phased data, except for the limited time-phasing of Formats 3 and 4. Additionally, it is usually at only level 3 or 4 of the WBS, rarely below the control account level, and does not contain any element of cost information. While this is generally sufficient to determine an individual contractor’s overall cost performance, it is difficult for prime contractors to use to integrate subcontractor data into a single EVMS, and likewise difficult, if not impossible, for government program offices to integrate multiple contractor reports into a program-level EVMS.

Furthermore, because Format 6 (IMS) is usually at the task level of detail, integration between the schedule and cost reports has often proven difficult for analysts. Providing time-phased data at a lower-level of detail should improve integration and analysis for all parties.

Additionally, PARCA expects that a new, comprehensive IPMR data file will reduce the burden on both the contractor and the government by streamlining processes and reducing duplication of efforts.

PARCA is currently in the process of testing the JSON interchange format, and conducting technical reviews with commercial software vendors. While PARCA has only released a notional timetable, it is expected that a draft DID could be released for industry review this summer, with a final policy being published by November 2017.

Update: Since this article was published, PARCA has reached out directly to us with an update. February, 2018 is the latest estimate for a final policy release.

What does this mean for you?

In general, new DID requirements are only applied to new contracts (though contract modifications are sometimes used to add requirements to existing contracts). For cost reimbursable DoD contracts over $20M in value, a tailored or full IPMR will be required. Other agencies may have different requirements, but you can expect the new IPMR DID to begin showing up on new contracts sometime in early 2018.

Commercial software vendors that specialize in the Federal IPM space should update their latest products to support the new reporting format. Software that is no longer under active maintenance will not likely support the new format.

Pinnacle brings a proven methodology to help your organization prepare for regulatory changes and improving your Integrated Program Management environment.  As management consultants with experience implementing and integrating all the leading PPM, EPM and EVM related commercial software, we offer a unique perspective focused on solving your business challenges.

Learn more about our IPM services.

Michael is President of Pinnacle Management Systems. Since joining the company in 2000 he has performed in a variety of consulting and management roles.